the year has almost come to a close. just today and tomorrow and 2019 will be finished. i'm really proud of how far i've come and how i've changed in this year. i knew last year was really productive but this one was even better. i really started formally programming this year and taking it seriously. i started with python in the spring to get the hang of the basics. really i just wasn't familiar with things like functions, parameters, arguments, and return values. with that knowledge and plenty of tutorials i was able to build my first real from scratch project of my "programming career" zen3mp for zeniea. while the code can be messy and i often mix my business logic and front-end i've learned a lot about the object oriented paradigm and managing a project with it.

then i was able to move on to the c language and experiment with the hyrule magic source code while reading plenty of books on c. i improved my reading comprehension a lot because of this and i'm really happy i've been reading so much as a result of it. i also started meditating and mixing that into my schedule as a means of managing my anxiety and mental health issues. it's been immensely helpful in not only dealing with my emotional development but also in being a better programmer. now moving towards the end of the year i've begun to dabble in c++ and have been using sfml to create a simple 2d game.

while i'm aware flirting with multiple languages has its pitfalls i feel as though i've found my "niche" so to speak in the c-style languages and will remain comfortably in this location going forward. i still want to work with web development languages as i've begun trying to pursue that as a side hustle building websites for money i also know that there is a lot of opportunity for c/c++ programming still in the industry.

i'm very excited also because i got the legendary structures and interpretations of computer programs for christmas from my girlfriends mom. i've already started to work on some of the exercises in the first section, began watching the lecture videos, and have been going out of my way to learn mit scheme (lisp) so that i'm prepared for all the material. despite not pursuing the functional programming paradigm i believe that this is going to really help me wrap my head around the idea of abstraction so that i can build larger modular projects going forward. i believe it's this more abstract understanding of the engineering of computer systems that i'm lacking right now and want to improve that by any means necessary before i find myself in the intermediate tutorial hellscape unable to build large scale projects without online assistance.

in other health related terms i finally went to the dentist and didn't skip out on making sure to get my cavities filled despite my anxiety. i sought out mental health care in the form of medication for panic attacks and weekly therapy which has helped me not only with the hypochondria issues that got me in the door but also with peeling back my ego that gets in the way of so much productivity. i've finally started exercising outside of skateboarding as well. with my job being more demanding physically it's been important to stretch and practice real exercise regularly and that also helps improve my mental well being.

i had great visits with my long distance girlfriend nicole. we spent last christmas together, our birthdays, our anniversary, and now this christmas and new years. i've had so much fun with her. we went on our first double date with her coworker and her boyfriend and seeing as we aren't usually very social people i'm proud and happy that we did that. we've gone out and seen nature in the form of a cranberry bog and a state park and now we get to ring in the new year together again. i'm so grateful for nicole and her positive influence on my life despite the distance between us and there's no one else i could imagine spending my life with.

i'm currently feeling so free and productive with this break. i've managed to get a lot done with all this free time and it feels great. i also think the studying i did throughout the semester helped me learn to be more productive in the time that i set out to work on things. i've found that i'm much more focused than i have been in the past while coding. i worked on a new layout for halext and did some light backend coding. i'm going for a loose mvc structure though while i'm making the code some of the components are mixed together until i separate them into files. it's not going to be a very complex website, but i'd like to use it as another opportunity to experiment with php. it's going to be a portfolio basically for me. i hope the halext.org domain isn't too much for people to deal with. i also have to work to make it mobile compatible. it's a space gray kind of color now which is going to be a big departure from the deep purple gradient, but i plan on including a "classic mode" where you can view the sites content through the original purple style.

i've made a decent amount of progress on winterstorm too. i made a github repo for it and worked on the animation for the sprite and lining that up with the animation component. i recently got a crack of photoshop to work on my mac so i've been using that a lot more lately. it runs great on this computer and is just my favorite, but i couldn't justify paying for creative cloud anymore so i cancelled it a few months ago.

we're finally here. i passed pre-calc (with a c) and i've got a month without school to chill and do stuff i wanna do. i'm very excited for it. i've got a decent handful of things i'd like to cover since i finally have the free time, so i figured i'd talk about them here. first off i'll want to work on the zeniea engine. there's still more to be done on the quests, item shop, and character stats system. i've done small bug fixes over the last month or so but nothing major at all. i've switched from atom to vscode recently which has been a pretty welcome change.

i started developing a game in c++ three days ago using the sfml library. it'll be an open world rpg of some sorts though i'm still working on ideas for the overall world. it may just be based on the same ideas as the zen3mp world or it could just be a generic high fantasy setting. i'm mostly just using the project to learn c++ and apply some of the object oriented fundamentals i've gained from php coding into something more concrete. this is the menu screen i've made up so far. 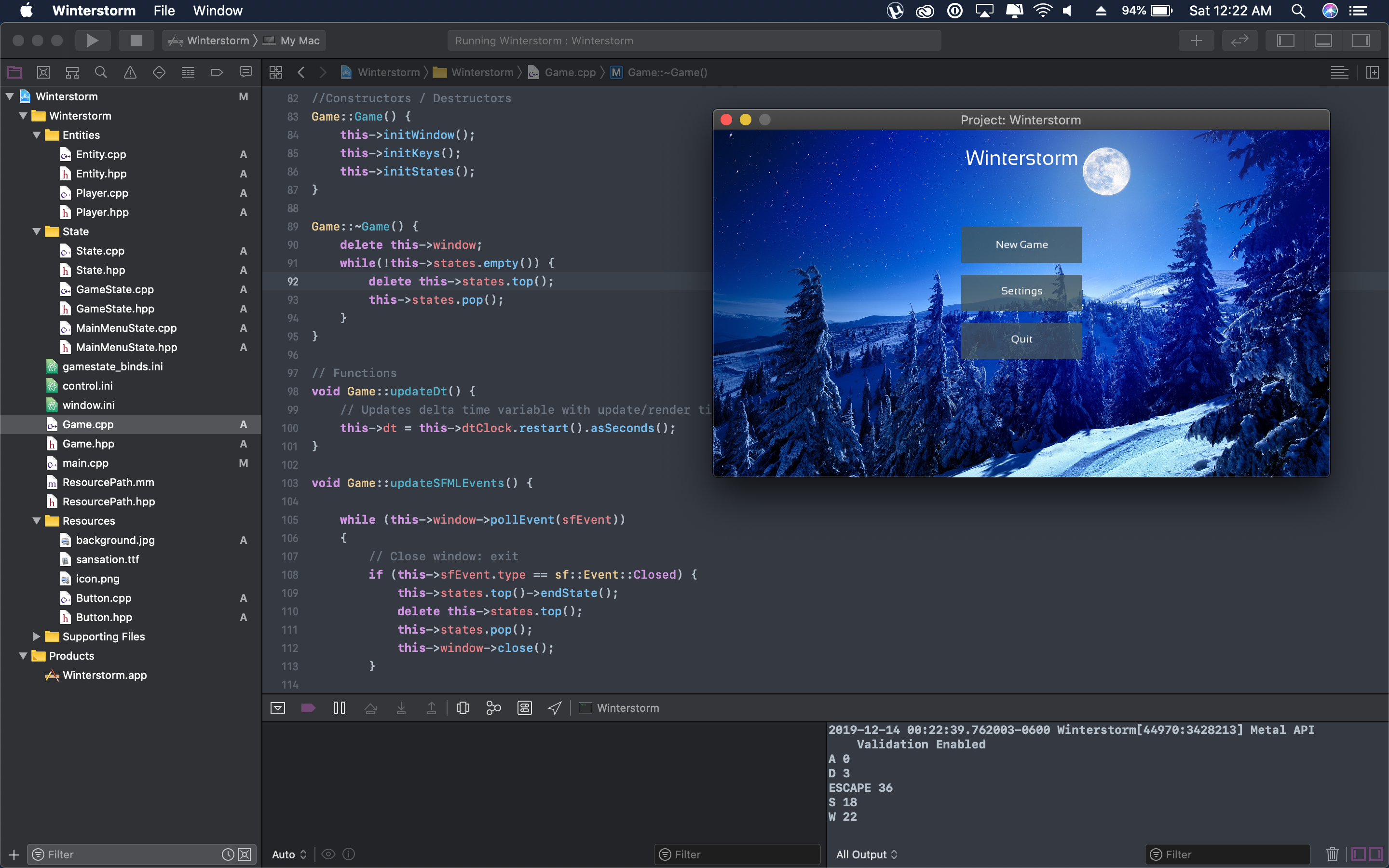 my first full time semester of college is nearly over. i'm quite excited for the month off of school. i've got three finals tomorrow which includes my english, history, and c programming classes and then the last one for pre-calc/trig on wednesday. that will be at 7:45am too. yikes. i've been studying all day and working on my essay for english. it's nearly complete i just need to conjure up a couple hundred or so more words and do some final edits.

the decade is nearly over with 2019 wrapping up here. i'm excited to go to new jersey for christmas and new years. i've got nicole some gifts and she's got some for me and i'm looking forward to having that experience with her.

i've been working on my c coding more, finishing up the projects for class and starting to venture out on my own a bit. i'm feeling comfortably with most basic and intermediate concepts and am now trying to do things like build data structures and work with pointers more. i'm also trying to read the hyrule magic source code more, though it's still proving to be daunting.