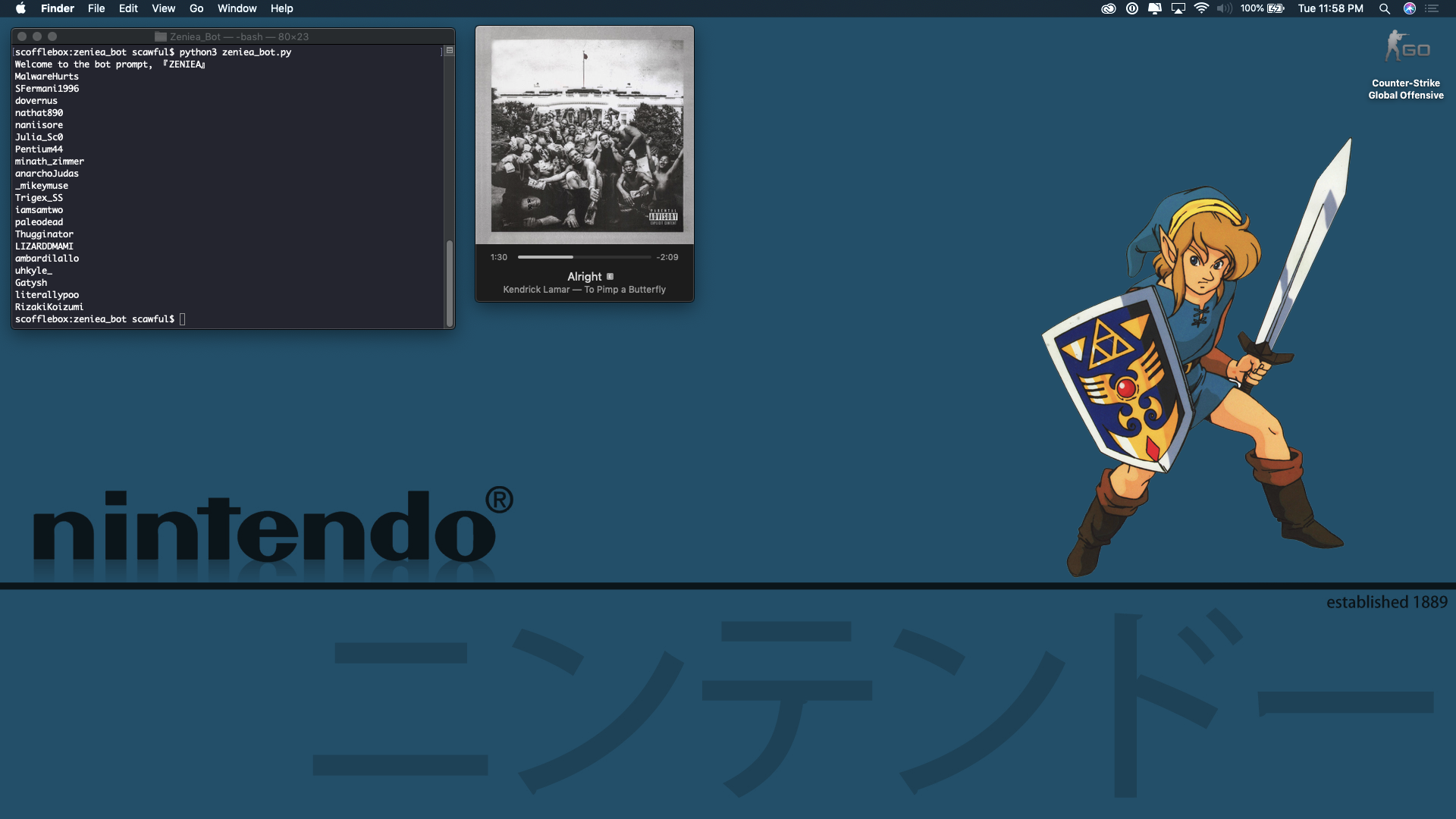 i updated the python page with my most recent program assignment. we are just now getting through the halfway point of the semester with 12 script assignments, five "programs" and six more quizzes. i'm starting to feel more comfortable with python as i was able to finish the four script assignments from tonight during class. i'd like to start experimenting with other libraries but i'm not sure where to begin. i have a decent idea of the fundamentals and am capable of troubleshooting most issues. it would be good to get some sort of personal project started so i have a lot to show for my experience in python. even though it is a bit strange and it gets a lot of hate online i might as well hack out a lot of code in it since it is so easy. it can show my capability of committing to learn a language even if i don't end up using python for everything.

i'm really starting to appreciate this new format with the blog, and i think as it gets warmer and i do more with my time i'll have more to blog about and populate the articles with. sometimes in the winter i can get so demotivated the days pass me by quickly. i can already tell with it being light outside later and the weather warming up that i'm feeling better.

now that spring break is over, getting back to school work has been a pain. this is why i'm glad i gave myself the off days this semester to catch up on homework. i've started browsing ***** again on /g/ and /v/ mostly. i got sucked in after the christchurch shooting to all the nonsense on /pol/ and seeing that dumpster fire for all it is worth was just next level. i don't feel like really getting into the detail of it all since you can visit /pol/ yourself but i discovered the presidential candidate andrew yang there, with all the Yang Gang memes picking up steam and his platform of giving everyone a freedom dividend (universal basic income, $1000 a month) is pretty popular. i want to stick with the big boy bernie for the 2020 election and personally i don't think andrew yang has the power to win the primary but it's still fun to meme about him so i will support his campaign regardless.

on the subject of the boards though, i think i want to try participating in a draw thread. i haven't gotten to express myself artistically since i shut down the zquest reboot in 2017 and experimented a bit. i think it would be a good way to practice, get more use out of my adobe programs and drawing tablet as well as getting to use kate and autumns characters without having to make zquest 3. i really love all my characters despite how awfully written their story was. the last few days the drawthread on /b/ has been getting spammed by some /pol/acks who like to use the hard R which has deterred me from participating. i think he has been banned now though, we'll see.

i finally got nicole to make a twitter and i'm very happy she is on the platform now.

i'm on a train right now to missouri. it's only been a little over a month since the last time i visited. my friend vinny is back in town for the week before he leaves for japan with the navy. it was very conveniently the same week as my spring break so i moved my work schedule around to come down. i'm excited to skateboard because it has been way too cold in illinois to skate this winter. i've tried doing some stuff in the parking lot at school but i usually can't last more than 10-20 minutes before the cold is just painful. i'm definitely going to be rusty, meanwhile vinny has been down in florida and is going to be styling on me hard. i've brought the go pro with so i will probably end up putting together some sort of video.

the last two days i've been trying to get halo 2 running on my mac in wine and it has been quite the pain in the ass. i'm on the mac os x mojave beta and it can be a little weird sometimes, i was getting stuck in the verification process for the wineskin wrapper i was going to use to install project cartographer and after wrestling with it trying to force os x to run the program, i just gave up for the night and tried again yesterday after rebooting and updating and it just managed to work. i had to install directx9 and the visual studio c++ 2013 libraries as well as some other things from within the wineskin wrapper that i just copied off a winedb page. 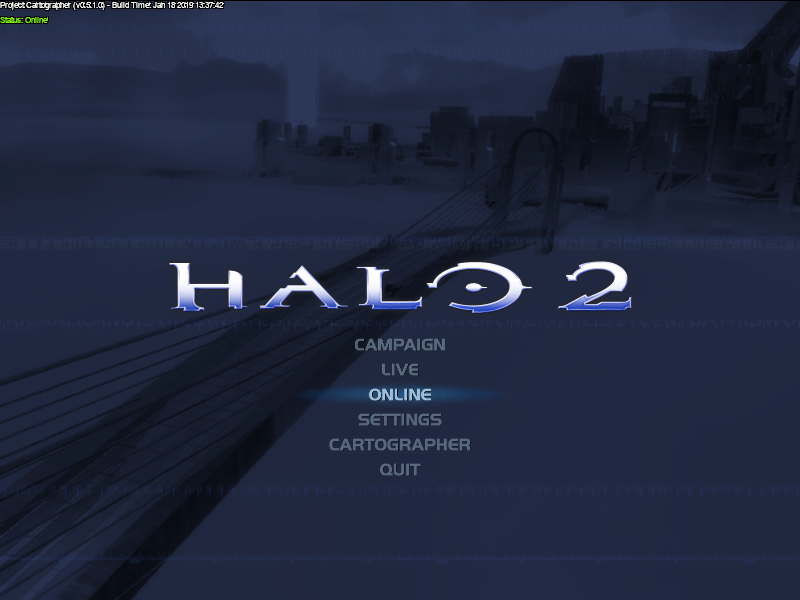 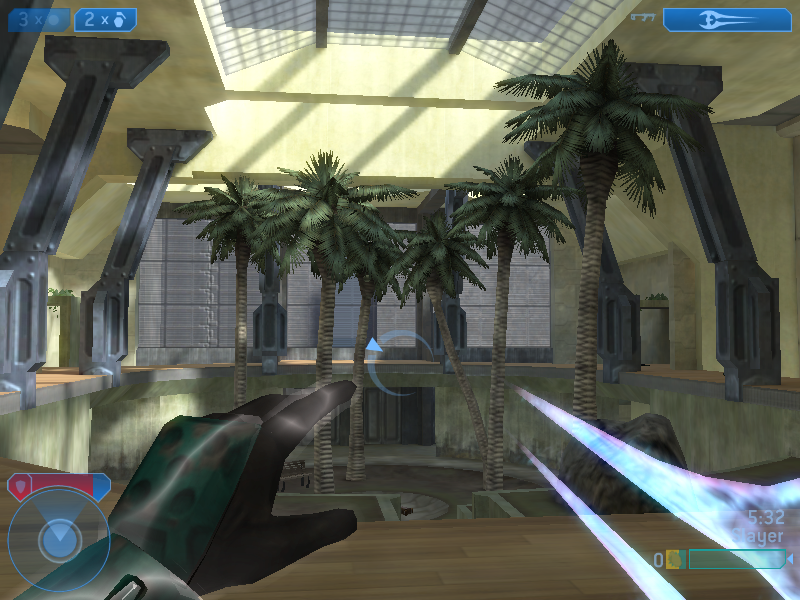 only problem is the sound does not work, so probably when i get back from missouri i will try to mess with that and see if i can get it working, if not though at least i can play with friends. this is one of those things where having mac os x is similar but also very different to a linux machine. wine is a pain in the ass to get programs running with os x and the operating system is usually the one blocking you, whereas linux you have complete control but could potentially break something. that's a bit of an oversimplification but that's how it feels sometimes. i was also like 14 when i had arch linux so breaking things often might have just been my own stupidity.

nicole is going to call me here soon before she goes to work for the day so i'll end this blog post here, i put a small update on the oracle page showing off hyrule magic in wine, if you're interested lol.

i've finally got around to organize a little bit, now each month will have its own page and multiple entries per page. this should make it easier for me to share things in smaller bursts without feeling bad about overpopulating the nav bar. i also have a native admin panel build in that allows me to edit the blog posts a lot more conveniently. i'm sure i'll end up reorganizing it a bit more now as well. i haven't spent much time pondering about the homepage recently mostly since i'd rather just wait for relevant content to populate the space and then judge the layout rather than allow myself to change it before it even has a chance.

lately i have been diving into the world of portable gaming homebrew with my 3ds and vita more. i've been messing with vita homebrew since 2016, and just recently got into the 3ds homebrew a few months ago. i'm super late to the party and it sucks because it seems all the spark in the homebrew community has shifted over to the switch but it has still been fun regardless compiling example codes to run on my 3ds/vita. the 3ds libraries seem to be a a bit more extensive and well documented than the vita but both of them have their advantages. i have an old 3ds model, the triforce ocarina of time limited edition one which has no additional c-stick so no 3D camera games really. in the last few years i only used my 3ds to play animal crossing with nicole but since installing custom firmware on it with ntrboot i've gotten a lot more use out of it with rom hacks and downloaded games.

now that i've started programming and compiling my own programs that can run on my 3ds, the process of transferring them over ftp and opening them in the homebrew launcher takes awhile and it is much faster to use the citra 3ds emulator locally on my computer to test my programs. i'm very new to c but the ctrulib is pretty straight forward and easy to work with. this program below is obviously literally nothing but print statements but ive compiled some of the other examples and i'm going to try and build some sort of application or game. 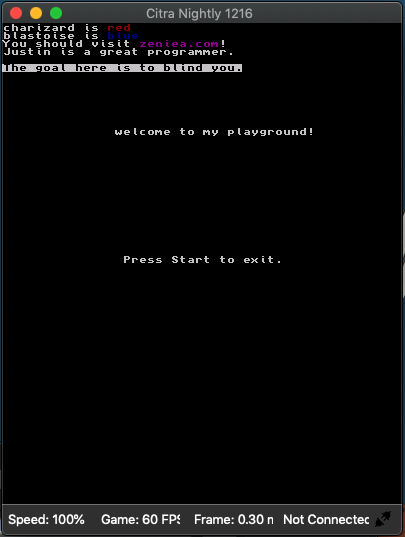 another thing i did on my vita was use a port of xash3d (which is also available for 3ds) to get half life running. it's a little laggy at parts and completely freezes when saving but it looks pretty cool. i tried using the valve data folder from my mac osx installation of half life at first but go figure, it did not work. so i got onto my surface and had half life installed, used that data and it loaded right up. 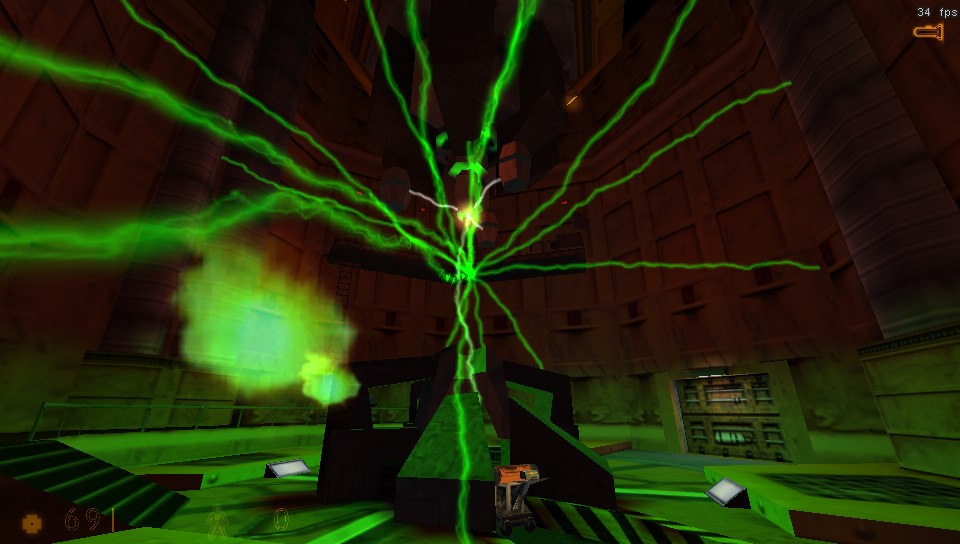 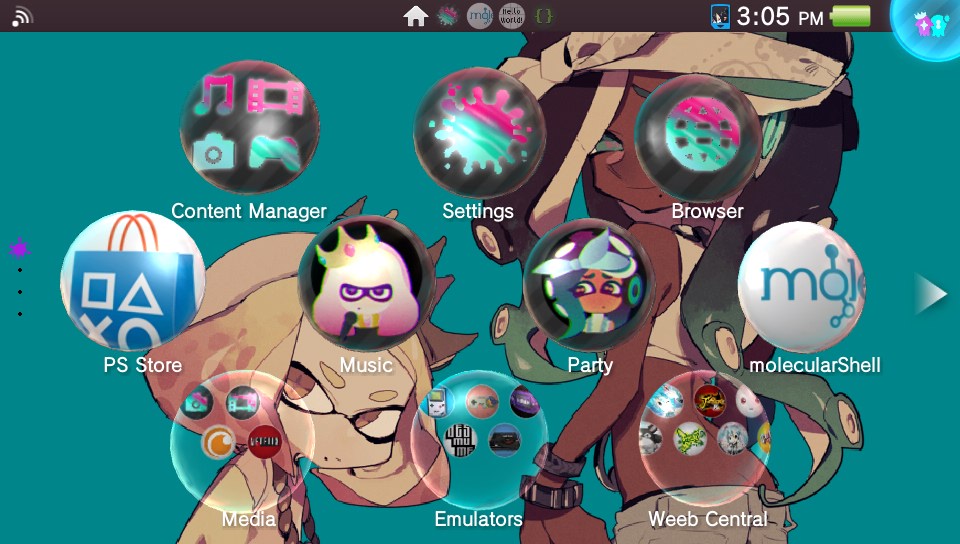 i've been listening to a lot of frank ocean the past few days. i've been going on these music binges. last month i listened to practically every album in kanye's discography a few times over and now i'm doing it with frank. thinking back on when blonde released i was in such a different place emotionally and for some reason i kind of stopped listening to it after a lot of stuff went down in my personal life so coming back to it lately has been very nice. reminds me of a simpler time.

school is also going well. i always find ways to stress myself out because i've been thinking about the long term of my education and all but it's really not all that bad. i took my math placement test awhile ago and did better on it than i did the first time, though i didn't test into calculus like i wanted to. i just have to practice more, because really i didn't prepare much for this one either. not as much as i could have. all my instructors are being chill and not giving any homework over spring break so i have next week to look forward to. i can just relax and sleep in a bit.

on a final note, i put together a little wallpaper that i use on my computer that i think is cute. obviously i didn't draw link but regardless it has gotten me into the zelda hacking spirit lately so expect updates on the oracle page! 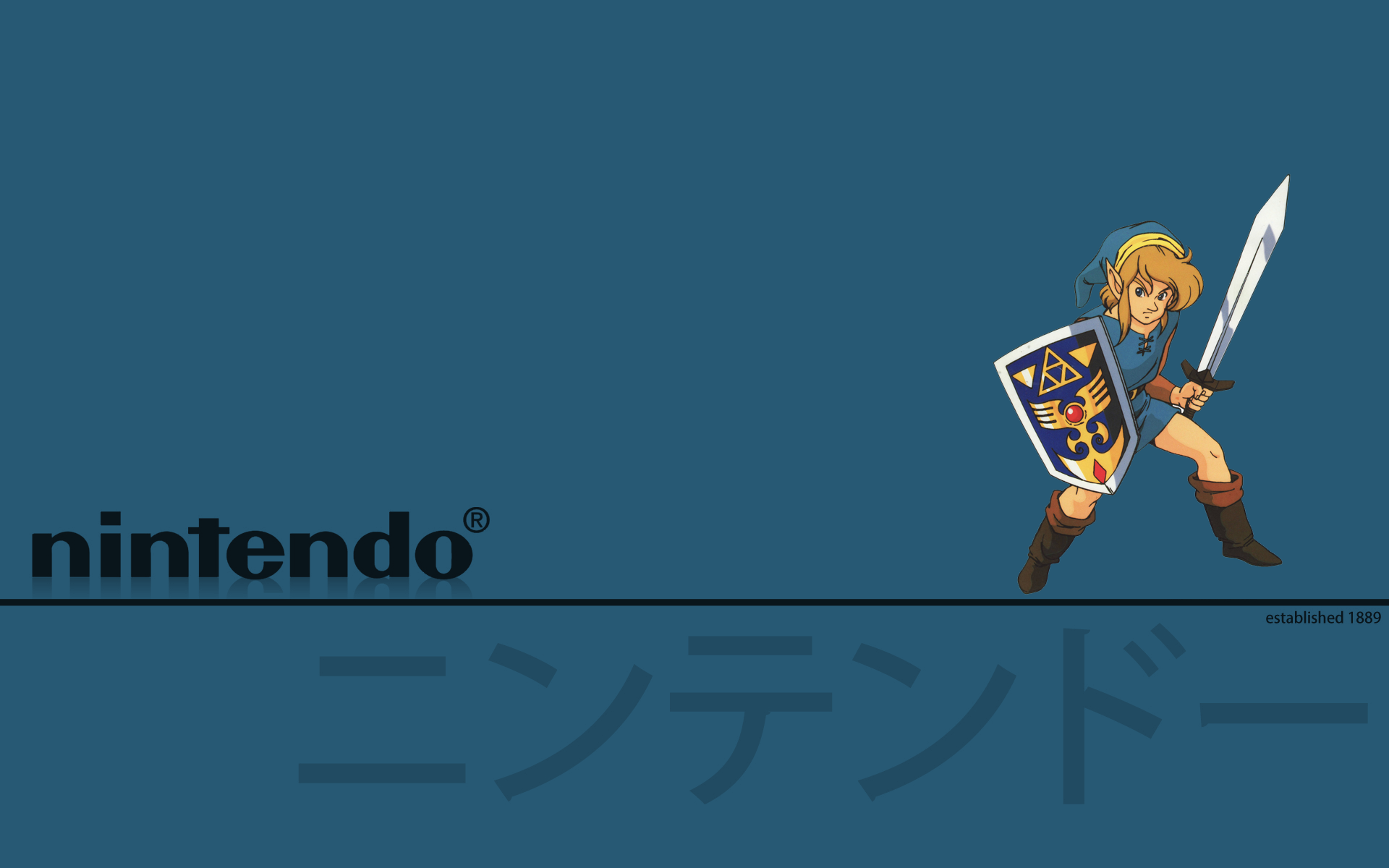